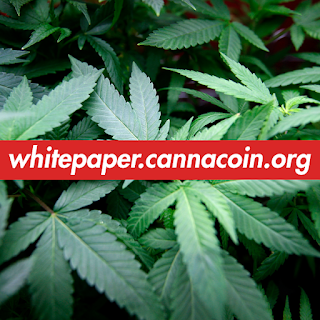 That's right! The long awaited Cannacoin Whitepaper has finally been released. It describes in complete detail the entire scope of the Cannacoin project and our most accurate representation of the entire ecosystem from our inception and our blockchain to our social mobile wallet and retail POS solutions as well as our Cannacoin ATM machines and beyond.

Take a look at http://whitepaper.cannacoin.org

Cannachan is the mobile social wallet for the Cannacoin ecosystem. It involves the ability to not only store you supply of Cannacoin but also allows you to connect with and add your friends to be able to send coins between each other. You can also see the block explorer, current market price, and you can exchange cryptocurrency for Cannacoin all within the app. It also has an associated debit card that is compatible with the CannATM machines and Cannacoin Pay POS systems.

here's how to be bitcoin rich in three years

If this information helps you please donate to my bitcoin fund
My BTC: 3KFmkyaRhS5izvm367qhTCAFmUgssPDsXt

Cannabis and The Financial System

While cannabis is widely accepted worldwide by most adults, there are still a lot of concerns about incorporating cannabis into our current financial system. We needed an alternative to cash that could be implemented worldwide, so we came up with Cannacoin ($CCN). Cannacoin was initially created in 2014 and deployed on the now defunct NWGT.org, an online medical cannabis forum. It was meant to circumvent the banking ban placed on cannabis businesses through federal prohibition. Cannacoin is ideal in many ways. It is cheaper and more secure than most payment methods. In a world where cryptocurrency is quickly becoming ubiquitous, Cannacoin is the best choice because Bitcoin is too precious to spend on everyday purchases.

We propose that the Drug War has been a complete failure of our rights and civil liberties as well as a health crisis of monumental proportions. The prohibition of cannabis has led to the proliferation of dangerous gangs and even more dangerous and deadly drugs. It has also weakened the health of the general population by removing hemp from the food chain where it had been a staple for thousands of years.

Since 2014, Cannacoin has had no major purpose other than to facilitate cannabis transactions but that is going to change. We are now making a bold move forward and have decided to align forces with NORML.org for the expansion of cannabis legalization.

When access to cannabis is ubiquitous, there will be a resulting greater level of harm reduction among the population, therefore enhancing the opportunities for a more robust involvement in education and therefore stronger society. Cannacoin is about cannabis activism, harm reduction, and health and healing through cannabinoid therapies as well as community service.

Alone, we are a small voice in the wind, but together with enough supporters we physically become a powerful force within this community and industry which can help push our vision forward into reality.

That's why we have aligned ourselves with NORML.org, the longest standing organization for cannabis law reform and together we can change the world.
at December 25, 2021 No comments:

Cannacoin Pay is a POS solution for cannabis vendors utilizing the Cannacoin cryptocurrency protocol. Cannacoin Pay enables merchants to accept Cannacoin for purchases in store and online. Merchants enjoy benefits beyond cash-only, including lower fees than any other processor, ability to waive traditional credit card fees, marketing support, loyalty and reward programs, and instant conversion to fiat funds in your local currency. Plus, Cannacoin transactions are 100% verified on the blockchain ledger.

Cannacoin Pay allows you to accept our cryptocurrency in store or online. You can then choose to further process credit card transactions through the Cannacoin Pay APIs and waive the usual processing fees.

Cannacoin is all about putting you in control of your money. We’re a new kind of digital currency that’s changing how people do business. Thanks to the smart technology built into our software, it’s never been easier for retail businesses to accept payment in Cannacoin, and we also offer a range of fantastic tools designed to help you manage your trading and even grow your business.
at December 21, 2021 No comments: